A life dedicated to the fine structural differentiation of neuromuscular diseases 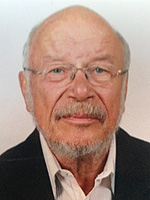 Uwe-Peter Ketelsen was born on October 12, 1940 in Kiel, Germany, grew up in Dresden and Cuxhaven, and studied medicine at the University of Freiburg/Breisgau, completing his basic clinical training in Freiburg, Oldenburg and Emmendingen. When in 1961-1965 application of electron microscopic technics became available for structural differentiation of neuromuscular diseases, he had just about finished his medical training including his doctoral thesis "Electron microscopic studies on the cerebral cortex of cats following electric cramps" in Freiburg (1967).
In 1969 he began his career as scientific assistant at the University Hospital for Children, Department of Pediatric Muscle Diseases, headed by Professor Robert Beckmann, at that time a prominent German clinician in the field of pediatric myology. Uwe used his knowledge to start working at a well-equipped electron microscopic laboratory of the nearby Max Planck Institute for Immunology. He was supported by the German Research Foundation (DFG), the Max Planck Society, and the German Society for patients with muscle diseases (DGBM). He achieved his "Habilitation" in 1976 by a thesis entitled "Ultrastrutural Myology", and was appointed in 1982 as extraordinary professor at the Department of Pediatric Muscle Diseases of the University of Freiburg/Brsg. After retirement of Robert Beckmann, the Medical Faculty enlarged the clinic to a "Department for Neuropediatrics and Muscle Disorders" appointing Professor Rudolf Korinthenberg in 1990 as head of the department.
Professor Ketelsen continued to work at this enlarged department as consultant ('Funktionsoberarzt') and head of the neuromuscular laboratory with scientific and diagnostic duties. His list of publications comprises 86 papers in PubMed many of which are based on fruitful cooperations with clinical colleagues. Most of his articles contributed to the knowledge of transmission electron microscopic aspects of neuromuscular diseases. More complex approaches combined freeze fracture technics with scanning electron microscopy (SEM) revealing abnormal numbers of square arrays, e.g., in myotonic and other disorders. In recent years he contributed as a co-author structural to genetic data when new genes and mutations were identified, e.g., in caveolin-3, or filamin myopathy, in mitochondrial disorders, or in peripheral neuropathies, e.g., caused by mutations of frabin. At meetings and congresses, Uwe liked to celebrate his carefully elaborated manuscripts to the audience with a sonorous voice and serious attitude. He acquired numerous prices including honorary memberships of the Brasilian Society of neuromuscular diseases in 1978, and of the Uruguayan Society of Child Diseases. In 1983, because of his clinicopathological expertise, Uwe-Peter was elected honorary consultant of the diagnostic "Reference Center of Neuromuscular Disorders at the German Society of Neuropathology and Neuroanatomy" (DGNN). This reference center was headed and promoted since 1983 by J. M. Schröder who had organized already before (since 1974 in Mainz, and since 1981 in Aachen, Germany) Saturday meetings of the small group of interested, myopathomorphologically publishing, German speaking clinicians and neuropathologists. Uwe actively contributed to these informal annual 'Neuromuscular Discussion Rounds' from the beginning. As a highlight, in 1983, he received the Duchenne-Erb award of the DGBM especially for his studies on the role of myoblasts in the human thymus, and on the pathogenesis of myasthenia gravis. Professsor Ketelsen retired from his active duties in Winter semester 2005, still closely affiliated with the department. In February 2015 he died after a short but severe disease. With deep sorrow we remember him as an active and enthusiastic colleague.